Embattled Hollywood star Alec Baldwin has finally settled with a man who sued the actor for allegedly punching him in the face over a parking spot in New York City in 2018.

Wojciech Cieszkowski sued Baldwin for assault and slander after the incident.

He accused the short-tempered actor of punching him in the jaw and shoving him during the disagreement.

Baldwin countersued the man for defamation alleging Cieszkowski lied about being punched when, according to the actor, he had only been “lightly pushed.”

In January 2019, Baldwin pleaded guilty to harassment and was sentenced to anger management classes and was ordered to pay a $120 fine.

“Alec Baldwin and Wojciech Cieszkowski have agreed to resolve all litigation concerning the incident that occurred between them on November 2, 2018,” the men’s lawyers said in a joint statement.

“The terms of the resolution are private and confidential.

Baldwin’s lawyer Aaron Dyer confirmed earlier that the actor’s cell phone was turned over to authorities in Suffolk County, New York, as part of the probe into the shooting death in his movie Rust.

Dyer said: “Alec voluntarily provided his phone to the authorities this morning so they can finish their investigation.

“But this matter isn’t about his phone, and there are no answers on his phone.

“Alec did nothing wrong.

“It is clear that he was told it was a cold gun, and was following instructions when this tragic accident occurred.

“The real question that needs to be answered is how live rounds got on the set in the first place.”

From The Daily Mail:

Baldwin pleaded guilty to harassment over the incident in January 2019. He had to pay a $120 fine and  sentenced to anger management classes.

Baldwin has had a number of physical and verbal altercations on the streets of New York in the past.

In 1995, he allegedly punched a cameraman who filmed him and then-wife Kim Basinger returning home from the hospital with newborn daughter Ireland.

In 2011, he found himself kicked off an American Airlines plane for slamming a bathroom door after being repeatedly told he needed to stop playing Words With Friends while the flight was preparing for takeoff.

And in 2013, he was suspended for two weeks by MSNBC for an incident in which he called a New York Post photographer a ‘c***-s***ing f****t,’ with the network then deciding to cancel his show, Up late With Alec Baldwin.

Alec Baldwin has settled a lawsuit about a dispute with a man over a parking spot in New York City, according to attorneys involved in the case https://t.co/Tg6iD8GUfa

Dem Senator Gives Joe Biden’s Admin An F On Baby Formula Shortage: “I give everybody an F, we need a national strategy”

Tom Cotton Blames Joe Biden’s “Reprehensible Incompetence” For “Artificial Shortage”: ‘They should have taken these steps months ago because the steps they are taking now won’t have a major effect for months to come’

Kellyanne Conway Fires Back At Husband George In New Book: “He was cheating by tweeting, violated our marriage vows to love, honor, and cherish each other” 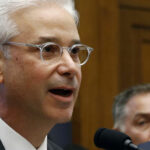 Wells Fargo CEO Warns Worst Is Yet to Come for Americans: ‘No Question’