Hollywood star Arnold Schwarzenegger has crashed his SUV into a Prius, crushing it in the process and sending the driver to the hospital.

The former California governor managed to roll his massive SUV on top of another car.

The driver of the small Prius was reported injured during the accident.

According to TMZ, law enforcement believes the accident was Schwarzenegger’s fault.

They say he blew off a red left-turn arrow and hit the car in the middle of the intersection, but the woman who was driving the Prius was making a u-turn so police have not yet determined fault.

Schwarzenegger has not been ticketed, however.

Schwarzenegger was driving a Yukon SUV when it collided with a red Prius at around 5:00 PM PT.

His SUV rolled and ended up on top of the Prius but also rolled and hit a Porsche Taycan. 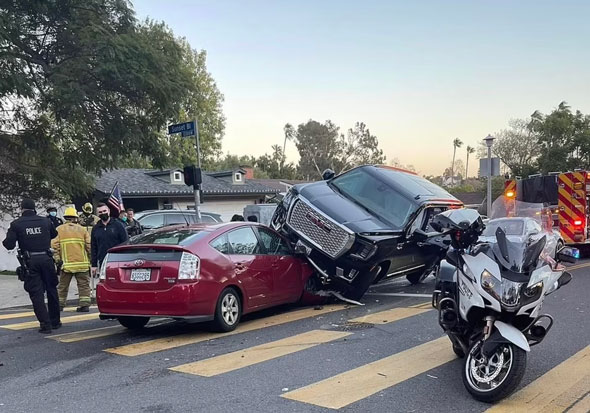 “Neither alcohol or drugs are suspected as a factor in this collision,” law enforcement said.

“All parties remained at the scene. No further information will be made available.”

Schwarzenegger was not injured but the Los Angeles Police Department said the woman driving the Prius suffered a head abrasion and went to the hospital.

One eyewitness says it was crazy … it looked like a stunt in a movie. The collision was intense enough that the airbags deployed on the Yukon.

The woman who was driving the Prius was injured — bleeding heavily from her head. We’re told an ambulance took her to the hospital.

Arnold, we’re told, is OK and is deeply concerned about the injured woman. An Arnold source tells TMZ he wants to personally check up on her.

The 74-year-old actor and former California Governor’s SUV rolled up onto a Prius and continued to roll, per CBS Los Angeles.

According to the outlet, Schwarzenegger was not injured but one person was taken to a nearby hospital via ambulance.

Per CBS LA, the Los Angeles Police Department report explained that the actor was driving his Yukon SUV “near the intersection of Sunset Boulevard and Allenford Avenue, when a collision occurred with a red Prius making a u-turn as he continued through a ‘red arrow’ signal to turn left.”

The report states that his car “rolled up onto the top of the Prius and continued to roll, ending up hitting a Porsche Cayenne and another vehicle that were waiting for the light to change as well.” Schwarzenegger’s airbags deployed, the report states.

News of the crash comes after Schwarzenegger’s divorce from Maria Shriver was finalized in December.

Shriver initiated the divorce after learning that Schwarzenegger was allegedly involved with a member of the family’s staff, with whom he had fathered a child.