Outrage as ‘The Atlantic’ Demands ‘Amnesty’ for Pandemic Tyrants: ‘You Murderous Hypocrites’

The American mainstream media outlet “The Atlantic” has provoked widespread outrage after demanding “amnesty” for the tyrants behind the authoritarian measures during the pandemic.

The outlet is calling for all of the pandemic-era decisions regarding lockdowns, school closures, masking, and vaccine mandates to be declared water under the bridge.

In an article authored by Brown Professor Emily Oster, a huge lockdown proponent, The Atlantic argues that pandemic tyrants should be “forgiven.”

“We need to forgive one another for what we did and said when we were in the dark about COVID,” writes Oster, who is now pleading for mercy from the once-shunned.

“Let’s acknowledge that we made complicated choices in the face of deep uncertainty, and then try to work together to build back and move forward,” she continues. 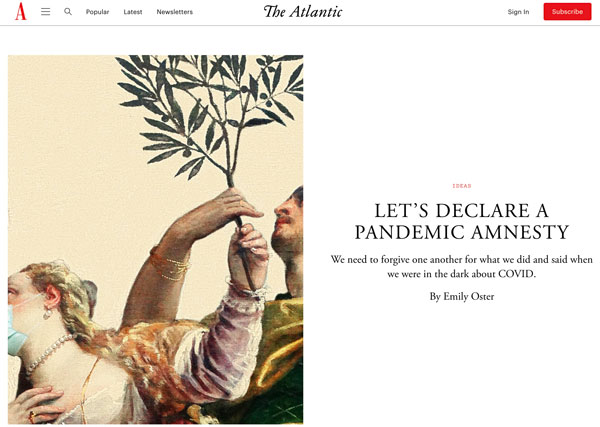 They weren’t “in the dark” about COVID-19, however.

There were numerous sources pointing out the actual science that ran contrary to the mandate claims, and they were deliberately silenced by a vast media campaign.

Evidence suggests that media platforms worked in tandem with Big Tech, the CDC, and the Biden Administration.

It was not a simple matter of overreaction, there was collusion to remove all counter-information.

“First, no, you don’t get to advocate policies that do extraordinary harm to others, against their wishes, then say, ‘We didn’t know any better at the time!’

“Ignorance doesn’t work as an excuse when the policies involved abrogating your fellow citizens’ rights under an indefinite state of emergency while censoring and canceling those who weren’t as ignorant.

“The inevitable result would be a society in which ignorance and obedience to the opinion of the mob would be the only safe position.”

Hey—sorry you lost your job b/c of the vax that doesn’t work and your grandmother died alone and you couldn’t have a funeral and your brother’s business was needlessly destroyed and your kids have weird heart problems—but let’s just admit we were all wrong and call a truce, eh?

It’s too bad we shut the entire economy down & took on tyrannical powers that have never been used before in this country—looking back, you should have been able to go to church and use public parks while we let people riot in the streets—but it was a confusing time for everyone.

Hey I’m sorry we scared the hell out of you & lied for years & persecuted & censored anyone who disagreed but there was an election going on & we really wanted to beat Donald Trump so it was important to radically politicize the science even if it destroyed your children’s lives.

OK, yes we said unvaccinated people should die & not get healthcare while never questioning Big Pharma once but we are compassionate people which is why even though we shut down the entire economy we also bankrupted the nation & caused inflation. You’re welcome! Let’s be friends.

As QTR’s Fringe Finance notes, Oster’s plea for the decency that her ilk failed to offer up to most Americans during the throws of the pandemic comes at a point where the Covid narrative has been all but lost by the Democrats and the mainstream media.

There have been several recent large wins for the unvaccinated who had the constitution and backbone to stand up for themselves throughout a year of being constantly berated and ferociously scorned as second-class citizens.

A majority of the media and Democrats had demanded that these people be removed from society and generally subject to scorn and ridicule.

Now, in a moment that many of us knew would eventually be coming, apologies are being made around the world for how the unvaccinated were treated.

“The premier of Alberta, Canada, said she is working on a plan to pardon residents who were fined or arrested over breaking coronavirus protocols, and apologized to unvaccinated Canadians who faced ‘discrimination.’“

In New York, a Supreme Court judge recently reinstated all employees who were fired from their jobs for being unvaccinated:

The court found Monday that “being vaccinated does not prevent an individual from contracting or transmitting COVID-19.”

New York City Mayor Eric Adams claimed earlier this year that his administration would not rehire employees who had been fired over their vaccination status.

The problem was not people’s ignorance of the facts, it was the organized antagonism and censorship against anyone presenting data that was contradictory to the mandate agenda.

This is setting aside proclamations like those from the LA Times, which argued that mocking the deaths of “anti-vaxxers” might be necessary and justified.

After two years of this type of propaganda, it’s hard to imagine people will be willing to pretend as if all is well.

The active effort to shut down any opposing data is the root crime, though, and no, it can never be forgotten or forgiven.

As ZeroHedge highlights, people are livid…

They were tossing terminally Ill people off of organ transplant lists and now call for mercy https://t.co/yRBRo5POVW

.@KariLake: "I want to have a commission to investigate Covid and how it was handled in this state. And hand up any civil, or criminal charges that need to be made. Because we're not just got to forget what happened when our lives were turned upside down." pic.twitter.com/mzsFZn6Nv6

This is where I spent the last 7 months with my mother before she died alone on December 3rd, 2020. You murderous hypocrites have nothing but my undying contempt. Rot in Hell. pic.twitter.com/ZcZ9qoaDwZ

As QTR further notes, many Americans whipped themselves up into such a terrified, hypnotic frenzy that they found themselves clinging to big government to impose their will, advocating for the same draconian and fascist-sounding policies they always claim to be fighting against.

Unsurprisingly, American Federation of Teachers chief Randi Weingarten, who “flunked the pandemic” by pushing for school shutdowns as long as she possibly could before parents revolted, is a big fan of amnesty.

"I've decided that I should be on the pardon list, if that is still in the works" pic.twitter.com/pNXoHk1d39

One cannot help but notice that the timing of the Atlantic’s appeal for passive forgetfulness coincides with the swiftly approaching midterm elections, in which polls suggest a much greater chance of a conservative upset than Democrats previously expected.

Though the Atlantic doesn’t admit it, there is a growing political backlash to the last two years of meaningless lockdowns and mandates, and Democrats were instrumental in the implementation of both.

A large swath of the population sees one party as the cause of much of their Covid-era strife.

Perhaps the mainstream media is suddenly realizing that they may have to face some payback for their covid zealotry.

“We didn’t know! We were just following orders!”

It all sounds rather familiar.