The Department of Defense has finally come clean and admitted that the United States military is funding 46 biolabs in Ukraine.

The Pentagon admitted to the U.S.-funded labs in a public statement this week.

The move comes after months of denials from Democrats and President Joe Biden’s administration regarding the existence of the biolabs.

The Pentagon said in an official statement:

The collaborative programs have focused on improving public health and agricultural safety measures at the nexus of nonproliferation.

Here is a screengrab from the U.S. DOD website: 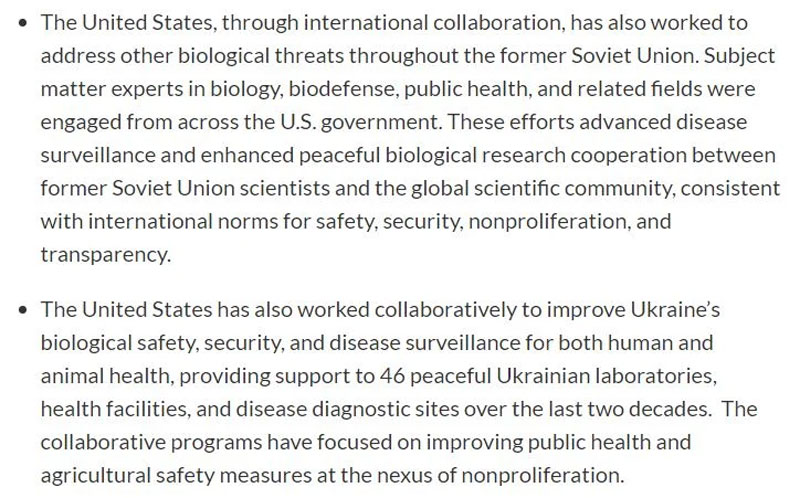 Romney accused Gabbard of spreading “treasonous lies” for simply talking about the US-funded biolabs in Ukraine.

He was responding to Gabbard raising concerns about the biolabs in Ukraine.

“There are 25+ US-funded biolabs in Ukraine which if breached would release and spread deadly pathogens to US/world,” Gabbard said.

“We must take action now to prevent disaster. US/Russia/Ukraine/NATO/UN/EU must implement a ceasefire now around these labs until they’re secured and pathogens destroyed,” she added.

There are 25+ US-funded biolabs in Ukraine which if breached would release & spread deadly pathogens to US/world. We must take action now to prevent disaster. US/Russia/Ukraine/NATO/UN/EU must implement a ceasefire now around these labs until they’re secured & pathogens destroyed pic.twitter.com/dhDTH5smIG

Tulsi Gabbard made her statement based on testimony from the Undersecretary of State for Political Affairs in Eurasia, Victoria Nuland.

Victoria Nuland admitted during testimony before a US Senate committee the existence of biological research labs in Ukraine.

Trump Overrules Biden: ‘The Biggest Win for Life in a Generation’ Was ‘Only Made Possible Because I Delivered’