President Donald Trump has dropped the hammer on twice-failed presidential candidate Hillary Clinton by calling out her “sordid legacy of lies.”

Trump is currently suing Hillary for over $70 million for pushing the false “Russian collusion” hoax about him.

Former 2016 Clinton campaign manager Robby Mook testified under oath last week that Hillary personally approved the Russia hoax to be spread in the media, even though her team doubted the legitimacy of the information.

Mook’s bombshell admission will come back to haunt the Clintons in the lawsuit.

On Tuesday, Trump took to Truth Social to spread the word about Hillary’s corruption.

He shared a headline from a New York Post article that said, “Hillary Clinton’s sordid legacy of lies,” and linked to the article. 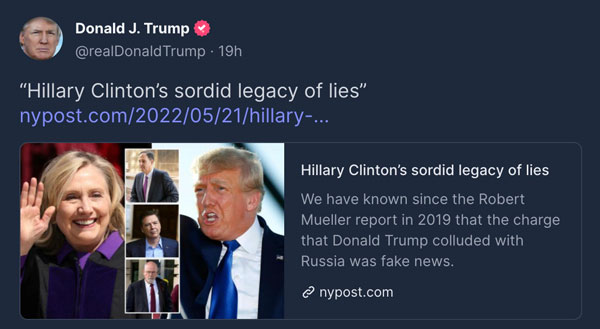 “Proving that what’s old is new again, here is how the late William Safire began his New York Times column of Jan. 8, 1996:

“Americans of all political persuasions are coming to the sad realization that our First Lady — a woman of undoubted talents who was a role model for many in her generation — is a congenital liar.

“Drip by drip, like Whitewater torture, the case is being made that she is compelled to mislead, and to ensnare her subordinates and friends in a web of deceit.

“Once again, Clinton is being exposed as ‘compelled to mislead’ and ensnaring ‘her subordinates and friends in a web of deceit.’

“And to think she almost got away with stealing the presidency.”

Goodwin goes on to point out an important fact that many forget about Hillary’s lies, writing:

“Another outcome was the 2018 midterms, where the hoax surely played a role in the public’s decision to hand control of the House to Dems, who instantly began their Russia, Russia, Russia investigation and soon turned to impeaching Trump.

“The Clinton lies, then, did enormous damage and, as Trump immodestly but correctly says, a weaker president would have reacted to the false attacks by curling up into a fetal position.

“The pattern raises the question of whether there were still other fabricated attempts by Clinton to paint Trump as a traitor that we don’t know about yet.

“Never underestimate her venality,” he said.

93-Year-Old Shoots Violent Home Intruder: He Came to a ‘Gunfight with a Pocket Knife’

JPMorgan Issues Bombshell Warning about Where Oil Prices Are Headed

Biden Admin to Give Ukraine Another $820 Million in Military Aid