Several former Twitter executives have been called to testify before Congress regarding their censorship efforts while working for the social media company.

Comer informed the disgraced execs that they are expected to testify in early February about the censorship of the New York Post’s reporting on the Hunter Biden laptop.

Twitter limited the distribution of the Post’s reporting on the content of the laptop in the run-up to the 2020 presidential election.

Information on the laptop linked then-presidential candidate Joe Biden to his son’s shady business deals in Ukraine and China.

However, Twitter’s new owner Elon Musk has released the company’s internal communications files which show the executives censored information to protect Biden’s campaign in an effort to stop President Donald Trump from being reelected.

Comer has sent a letter to Roth, Gadde, and Baker this week to inform them that their “attendance is necessary.”

Roth was head of Trust and Safety, Gadde was head of legal, policy, and trust, and Baker served as the deputy general counsel.

All three played key roles in the company’s censorship decisions.

Gadde was fired when Elon Musk took over Twitter and Roth left in November.

Baker, who worked at the FBI before joining Twitter, was fired by Musk for interfering with the release of internal Twitter documents, famously known as Twitter Files.

The Twitter Files revealed the company’s history of censorship, including the suppression of the Hunter Biden laptop story.

“On December 6, 2022, I wrote to you requesting your appearance at a Committee hearing during the 118th Congress,” Comer wrote in the letters to the three executives.

“Your attendance is necessary because of your role in suppressing Americans’ access to information about the Biden family on Twitter shortly before the 2020 election.

“This letter reiterates the Committee’s request and — for your convenience in planning travel — informs you of the hearing date, which will be the week of February 6.” 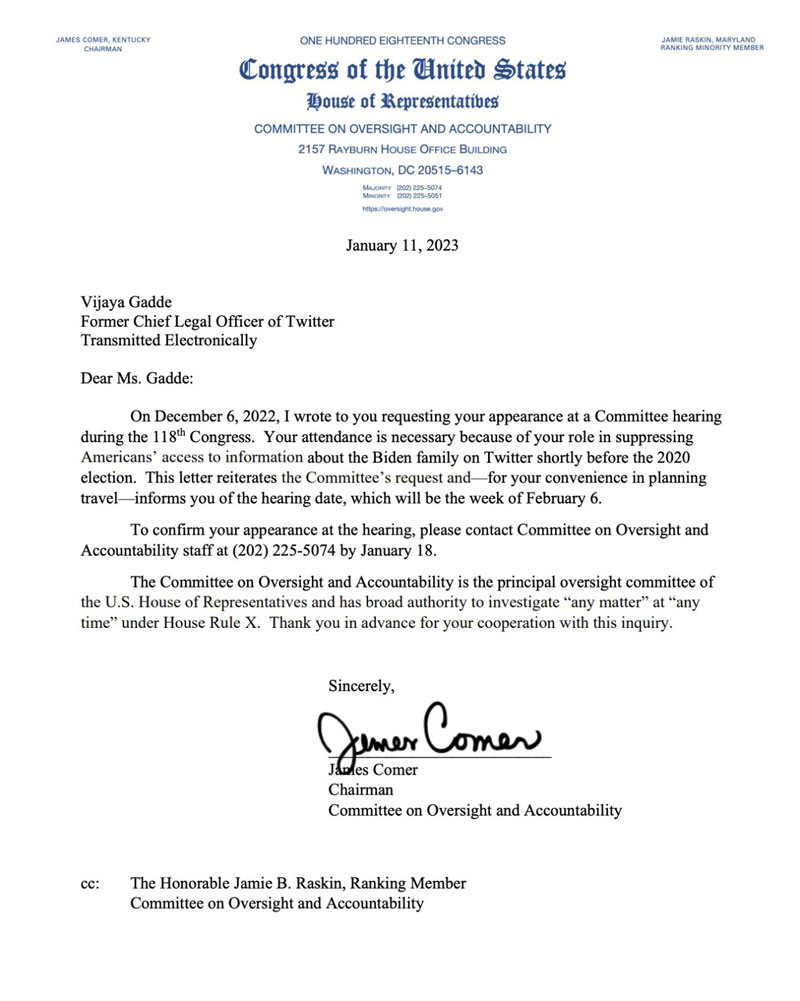 The letter is not binding.

However, if they do not respond by the January 18 deadline, the committee could vote to compel their appearance.