Investigators in Japan are raising the alarm over the spike in sudden deaths and believe they have discovered a link behind the soaring excess fatality rates.

Two renowned Japanese medical professors are leading the investigations into rising numbers of unexpected non-Covid deaths that have been seen in Japan and other nations around the world.

The researchers believe they have identified a pattern following their examinations of the bodies of people who have died after being vaccinated.

Professor Nagao, a medical specialist in forensic medicine, performs autopsies, together with Japanese authorities, of more than a hundred bodies a year.

During his analysis of the people who died following vaccination, Nagao focused on a particular pattern.

While performing autopsies on vaccinated people, authorities have been reporting unusual inconsistencies.

They found that the vaccinated bodies had temperatures of over 100 degrees Fahrenheit (40 degrees Celsius).

According to Nagao, this increase in temperature is a cause for concern.

“The first concern was that the body temperatures of the corpses were very high when the police performed the autopsy,” Nagao said.

“Normally, at the stage of the autopsy, body temperatures are in the 20s (68 F) or lower,” he explains.

The research has led Nagao to conclude the vaccine causes immune system abnormalities that prompt inflammation throughout the body.

The professor notes that this is likely the cause of the high body temperatures at the time of the autopsy.

Nagao states that, while his findings haven’t proved that the shots are the cause of the spike in sudden deaths, his research suggests a link between the shots and the excess fatalities.

“Based on the data and the circumstances alone, it is not possible to conclude that the vaccine was the cause of the deaths,” said Prof. Nagao.

“However, it is impossible to say that the vaccine was not the cause.

“We can only say that it is doubtful, but we believe that vaccination was sufficiently related to the immune abnormalities.”

Masataka Nagao, Hiroshima University School of Medicine has revealed a causal link between vaccines and death.

"We believe that vaccination was sufficiently related to the immune abnormalities." https://t.co/9oogVhdaJ8 pic.twitter.com/YzCBYPI4rj

Similarly, research by dermatology Professor Sano describes the discovery of spike proteins near the site of skin lesions and other skin disorders in vaccinated patients.

“The spike protein derived from the vaccine was found in the skin,” Sano explained.

“As a result, the spike proteins facilitate in reactivation of the herpesvirus.”

“The function of the spike proteins to produce adverse reactions is the formation of blood clots,” he added.

“And even worse, spike proteins can also locally induce inflammation.

“Sometimes, things that are not good are introduced into the human body,” he warned.

“Vaccination may cause our overall immune system to fail to fight against such bad things.”

Also, Japan is one of the countries with the highest rates of vaccinations and masking in the world.

However, Japan also has the highest rate of COVID-19 cases.

Japan with highest Vaccine rate and all still wearing masks and they have the highest COVID rate. pic.twitter.com/OpOqkuLZF9

“Can anyone explain the Japan Paradox?” said Dr. Amitav Banerjee, formerly a field epidemiologist in Armed Forces and headed the Epidemic Investigation Team at AFMC from 2000 to 2004.

“Before rollout, there were hardly any cases and deaths,” Banerjee added while highlighting two graphs of data. 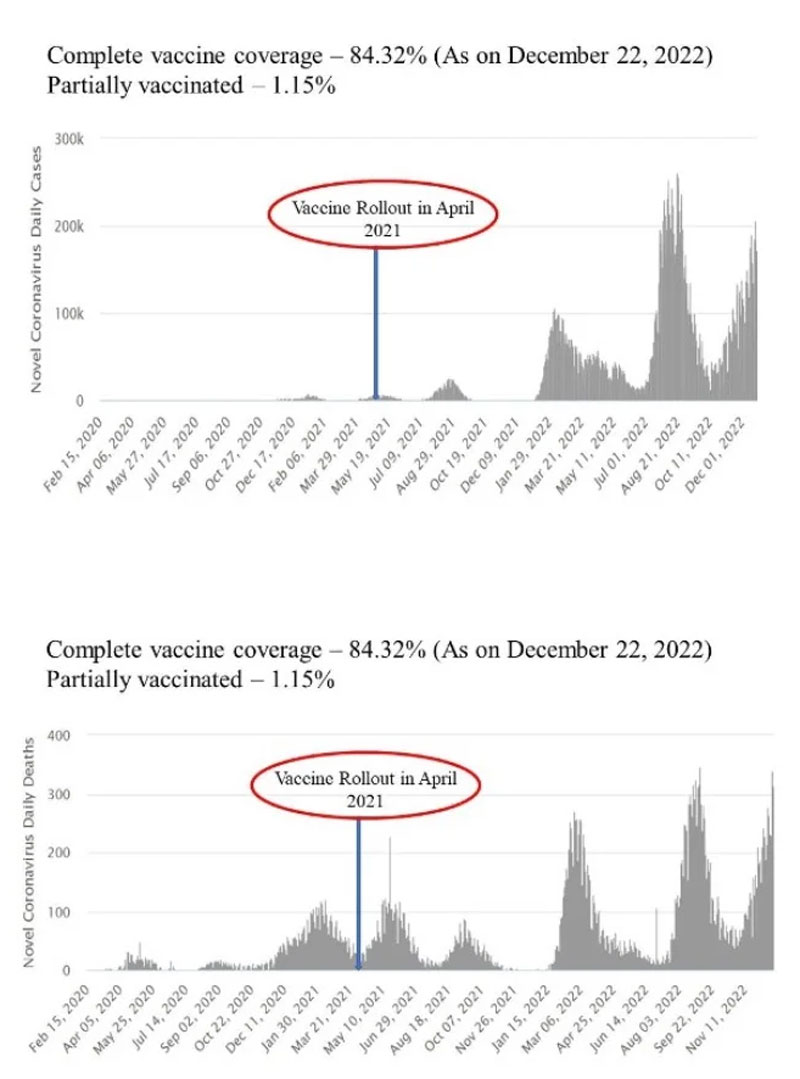