In the video below, Biden appears to do what everyone who has ever been to a conference full of boring speeches has done. First, he closes his eyes, then catches himself and opens them, then gives in again and closes them until a staffer comes up and seems to wake up Biden.

Biden earlier took questions from reporters and addressed his relationship with other European leaders and his sinking poll numbers as all eyes turn to the Virginia governor race.

JOE BIDEN, PRESIDENT: And now I’m happy to take some questions.  And I’m told I should start with AP, Zeke Miller.  Zeke, you have a question?

BIDEN:  I didn’t recognize you with the maks [sic] on — mask on.  I apologize.

MILLER: Thank you, Mr. President.  Here in Rome, you’ve tried to showcase that America is back.  But back at home, your poll numbers have fallen.  Your party’s nominee for governor of Virginia is facing a very tough — a tougher-than-expected race.  Your party spent months trying to negotiate the centerpiece of your Democrat — of your domestic legislative agenda.

We’re one year now since your election.  What — and you have done a lot in your year in office to try to turn the page on the last administration.  But we’ve seen how presidents can turn the page very quickly from one to the other.  So why should the world believe that when you say “America is back,” that really it’s here to stay?

BIDEN:  Because of the way they reacted.  You were here.  They listened.  Everyone sought me out.  They wanted to know what our views were.  And we helped lead what happened here.

It’s just very simple: You know, if you’re honest — you are honest; I didn’t mean to imply you weren’t — but that we were — we got significant support here.  Significant support.  We’re the most — the United States of America is the most critical part of this entire agenda, and — and we did it.

And, by the way, look, the polls are going to up and down and up and down.  They were high early, then they got medium, then they went back up, and now they’re low.

Well, look, this is — look at every other president; the same thing has happened.  But that’s not why I ran.  I didn’t run to determine how well I’m going to do in the polls.  I ran to make sure that I followed through on what I said I would do as President of the United States.

The footage comes days after Biden met with French President Macron; telling the European leader the US arms sale to Australia was “clumsy.”

“Is your relationship repaired?” asked one reporter in Rome

“The answer is, I think we, uh, what happened, was uh, to use an English phrase… uh… clumsy,” said the American President.

Climate Czar John Kerry caused a stir on social media earlier this month after telling a French TV network that Joe Biden had “literally had not been aware” of the United States’ Nuclear submarine deal with Australia. 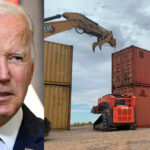