Los Angeles Lakers star LeBron James is opening a museum dedicated to himself in his hometown of Akron, Ohio.

The LeBron James Family Foundation announced it is building a museum in Akron to honor the journey and legacy of a star NBA player who only won three championships.

James’s foundation posted an announcement on Instagram that said:

“The story of @kingjames will live on in Akron forever inside the one-and-only LeBron James Museum by @upperdecksports at House Three Thirty.

The statement didn’t reveal whether the museum will have an exhibition highlighting how James enriches himself with Chinese Communist Party cash while turning a blind eye to China’s human rights abuses, however.

The first exhibit space will feature his humble early years growing up in Akron’s Springhill Apartments.

The space will explore how growing up in humble surroundings made him the person he is today.

The next exhibit space will focus on how he honed his basketball skills, winning accolades and championships at Akron’s St. Vincent-St. Mary High School and forging friendships that have lasted a lifetime.

This all leads up to the big show — his NBA career.

The next exhibit space will take a look at his off-the-court business ventures, such as a pizza business and various entertainment endeavors that include TV shows like “The Wall” and his movies like the recent reboot of “Space Jam.”

James said this month that he would finish his career with whatever team drafted his son, Bronny.

James began his career with the Cavs, announcing his decision to join the Miami Heat in a controversial 2010 ESPN special to join a Miami Heat team that won NBA championships in 2012 and 2013.

He went back “home” to Cleveland and led the Cavs to that city’s first championship in any professional sport in decades in 2016 before rolling out again in 2018 to try bringing the Lakers back to glory in the post-Kobe Bryant era.

But that hasn’t gone to script. The LeBron era Lakers won one ring in the pandemic-shortened 2019-2020 season and signed James to an $85 million contract extension.

But they were bounced from the playoffs in the first round the following year and the LeBron-led Lakers are currently below .500 and on the outside of the playoff hunt.

“Doubly Pissed Off:” Elon Musk Goes Scorched Earth On Hillary Clinton: ‘I am doubly pissed off about those funds being used for lying because I donated and voted for Hillary’

Elon Musk Calls Out Hillary Clinton: “Bet most people still don’t know that a Clinton campaign lawyer, using campaign funds, created an elaborate hoax about Trump and Russia. Makes you wonder what else is fake” 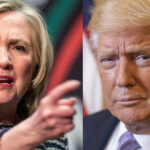