Republican former Speaker of the House Newt Gingrich has opened up about his feelings on Democrat President Joe Biden’s performance in the White House.

During an appearence on Fox News’s “Jesse Watters Primetime,” Gingrich discussed where he sees Biden fitting in to the American history books.

“The world’s gotten to be very expensive and very dangerous,” under Biden, Gingrich explained.

Biden “seems to have no clue about what’s going on around him,” he added.

Gingrich then continued by ranking Biden among American presidents.

“I think it’s not fair to say that he’s the worst president,” Gingrich said.

“I think Buchanan, who got us into the Civil War, still has that title.

“But it would be fair to say that Biden may be the second-worst president in American history, at least in terms of his destructive effect.

“You know, my wife went out Saturday, filled up her car, and came home in a state of shock.

“Now, I don’t care how often Joe Biden goes on comedy shows, and I understand he’ll be on a comedy show Wednesday night.

“First of all, it’s not funny when you can’t find infant formula and you can’t pay for gas and you can’t afford food and crime’s going up in your city.

“You know, you’re not eating in the White House mess and you don’t have Air Force One taking you somewhere.

“The world’s gotten to be very expensive and very dangerous,” he said.

“And Biden seems to have no clue about what’s going on around him.”

Biden just suffered a snub on the international stage.

The Summit of the Americas — an event bringing together leaders of countries from Chile to Canada this week — was supposed to be a chance for the White House to demonstrate its leadership on big issues such as migration, climate change, and recovering from the pandemic.

But the agenda has been overshadowed by who won’t be at the table.

The absences are drawing attention to the waning influence of the United States in the region and raising questions about U.S. commitment to Latin America. 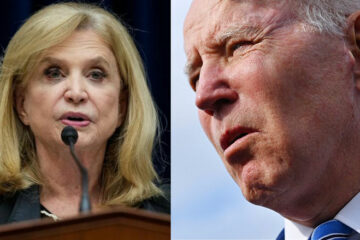