A Quarter of Democrats Believe Men ‘Can Get Pregnant,’ Poll Shows

Almost a quarter of registered Democrat voters say they believe that men “can get pregnant,” a new poll has revealed.

The survey, conducted by WPA Intelligence from August 22-25, found that 22% of Democrats overall agreed with the statement: “Some men can get pregnant.”

The percentage rose to a staggering 36% among white, college-educated female Democrats, who concurred that “men can get pregnant.”

29% of white Democratic women, 27% of people who identify as liberal, and 21% of Biden voters also thought that the statement was accurate.

However, when the results were expanded to all voters, the percentage dropped significantly.

“But with 36% of a core Democratic constituency (college-educated white Democratic women) and one out of five Democrat voters believing this, one can see why Democratic leaders coddle the radical gender theory movement.”

Misinformation isn't a one-way street. One out of five Democrats believe men can get pregnant, including:

The results demonstrate the extent to which the radical gender ideology has metastasized on the political Left.

Though it is obviously impossible for biological men to bear children, the proponents of radical gender ideology teach that a biological woman can identify as a man.

Since a transgender man can bear children, “woke” leftists argue that men can get pregnant because they “identify” as male, despite going through the female process of bearing a child.

In reality, however, a transgender man is simply a biological woman masquerading as a man.

The absurdity has also seeped into language with the use of terms such as “birthing people.”

GOP Sen. Ted Cruz of Texas retweeted the Daily Wire’s article about the poll and quipped, “Given Democrat men, this might be true.”

“This shouldn’t be controversial.”

This shouldn’t be controversial. 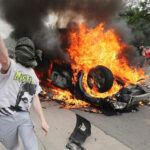