The World Economic Forum and its powerful allies are trying to cover up their links to FTX as the recently-imploded cryptocurrency exchange’s money laundering operation in Ukraine has been exposed.

As Slay News has been reporting, details have been emerging that FTX has been at the center of a money laundering effort in Ukraine that has benefitted U.S. Democrats and powerful global elites.

FTX co-founder and CEO Sam Bankman-Fried has admitted that his crypto company served as the Ukrainian government’s laundromat.

After Democratic Party politicians, including President Joe Biden, pushed for billions of dollars in taxpayer money to be sent to Ukraine, the funds were laundered through FTX and funneled back into the 2022 midterm elections campaigns of Democrat candidates and the pockets of powerful elites.

The bombshell explosion of FTX has exposed several top politicians and global elites.

As the scandal continues to unfold, many are now apparently panicking and scrambling to hide their ties to FTX and its disgraced, 30-year-old founder Bankman-Fried.

For some time, Slay News has been reporting on the WEF and its annual event in Davos, Switzerland.

The annual meeting is a must-attend for globalists politicians, world leaders, and corporate power elites.

Each year they gather to offer up new ideas and develop plans to advance the WEF’s agenda.

The agenda mostly involves stripping the public of basic freedoms to benefit the elite under the guise of tackling “climate change” or the Covid pandemic.

Web archive sites show that the World Economic Forum had previously listed FTX as one of its “partners,” touting the Bahamas-based firm as a “cryptocurrency exchange built by traders, for traders.”

Bankman-Fried also was a speaker at Davos last May alongside luminaries such as Google financial chief Ruth Porat and Bill Winters, CEO of the London-based financial giant Standard Chartered.

Nevertheless, WEF has since scrubbed any mention of Bankman-Fried and FTX from its website in the days after the crypto exchange filed for bankruptcy.

“FTX was a World Economic Forum partner,” a spokesman for Schwab’s Geneva-based organization said in a statement on Monday.

“In light of last week’s events, their partnership was suspended and they were removed from the Partners section of our website.” 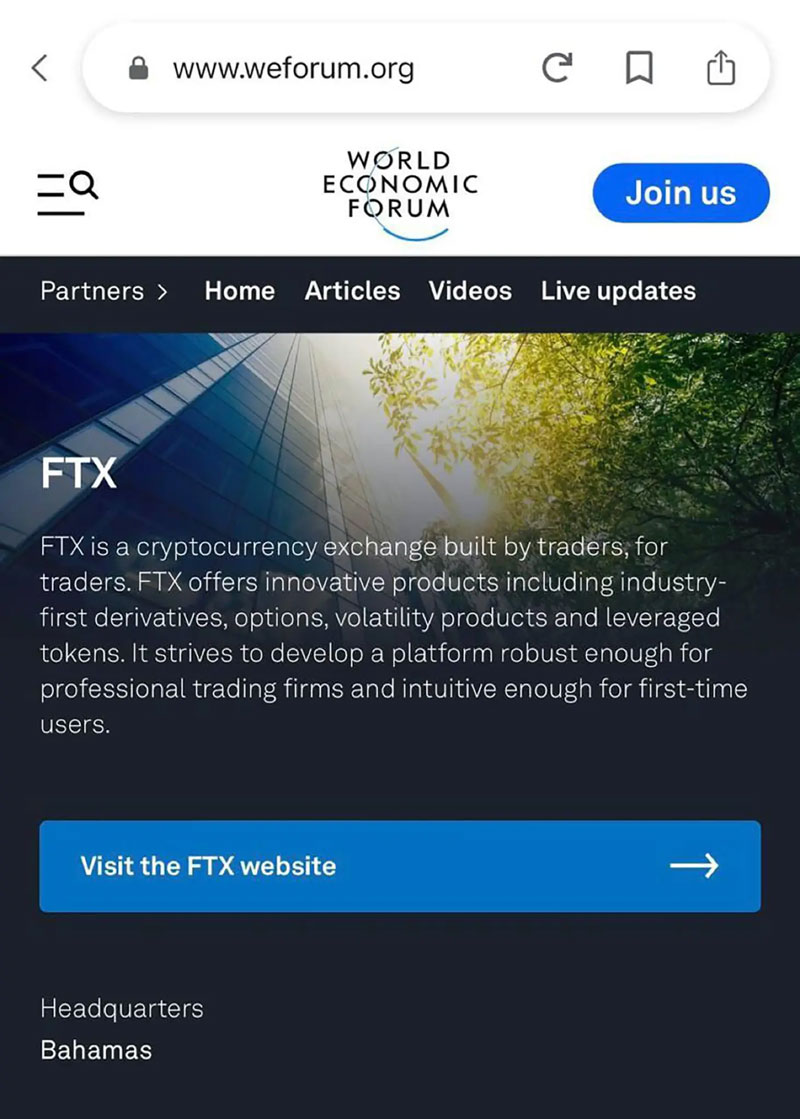 According to one WEF insider, Bankman-Fried likely landed on the group’s site because he donated cash to the group, in addition to his upcoming speaking gig.

“World Economic Forum survives on donations from outside organizations and companies that are typically aligned with their mission and politics,” the source told The New York Post.

The WEF isn’t the only group that has egg on its face from its cheerleading for FTX and Bankman-Fried, whose $16 billion fortune evaporated in a matter of days — a stunning collapse that has elicited comparisons to Lehman Brothers and Enron. Bankman-Fried is under federal investigation.

Photographs circulated online over the weekend showing former President Bill Clinton sitting next to Bankman-Fried on stage — along with former British Prime Minister Tony Blair — at an event in the Bahamas this past April.

Tony Blair and Bill Clinton on the same stage (and SBF.) You don’t see that very often these days, eh? pic.twitter.com/Vt5pn6egHn

Many were typically plowing money into FTX through family offices.

“This is like a Madoff situation … almost everyone in tech and Hollywood invested in this thing,” one investor close to FTX revealed.

“Now no one wants to admit to it.”

One insider told The Post that Jan Koum — the Ukrainian billionaire who co-founded WhatsApp and sold it to Facebook for $19 billion in 2014 — bought a stake through his family office.

Koum has not commented publicly on FTX’s meltdown, however.

Meanwhile, Twitter users have been promoting a video showing CNBC investing maven Jim Cramer touting Bankman-Fried as “the JP Morgan of his generation.”

Another Brilliant Prediction From CNBC’s ⁦@jimcramer⁩ Cramer: The JPMorgan Of This Generation – Sam Bankman-Fried's FTX pic.twitter.com/BDKf16CqU4

Kevin O’Leary — the “Shark Tank” investor who also admitted he has taken a bath on an FTX bet — posted a mea culpa on his Twitter account over the weekend.

O’Leary told his 951,000 followers: “As an investor, you will never get it right every time.

“You will make some mistakes.

Elsewhere, Bankman-Fried has been closely aligning himself with the WEF’s agenda.

In June, Puck News reported that Bankman-Fried was hiring staffers with experience in journalism to advise him on media relations strategy for his pet projects, including future pandemic preparedness.

His aides purportedly took meetings with “several newsrooms” on potential nonprofit and for-profit partnerships — all funded by Bankman-Fried.

Bankman-Fried was open about his ambitions to become a political kingmaker — once declaring that he planned to spend a whopping $1 billion in the 2024 presidential election cycle.

He later walked back that brazen claim, describing it as a “dumb quote.”

The disgraced executive may have dialed back the extent of his planned political spending, but he was still a major booster of left-leaning candidates and causes during the 2022 midterm elections.

He was the Democratic Party’s second-biggest donor, trailing only George Soros.

Bankman-Fried spent an estimated $40 million on political donations during the stretch run.

Most of his donations fueled Democrat-tied causes, according to the Financial Times.

His spending included a disastrous $11 million investment in the campaign of Carrick Flynn, a first-time Democrat House candidate in Oregon who failed to advance past the primary.

Bankman-Fried’s sudden downfall has rankled some within the Democratic Party who expected a major influx of donor cash in the months ahead.

“Sam didn’t live up to his commitments,” one Democrat lobbyist told the outlet.

As for the WEF, its ties with Bankman-Fried extend to his family as well.

His aunt, Linda P. Fried, an epidemiologist who serves as the dean of Columbia University’s Mailman School of Public Health, is listed on the WEF’s website.

In 2012, Linda P. Fried contributed to a WEF-funded study on the aging global population.

Meanwhile, details of Bankman-Fried’s role in the Ukraine money-laundering scam are still emerging.

However, the bombshells that have emerged so far appear to be just the tip of the iceberg.