“Velma,” the “woke” spin-off of the classic cartoon “Scooby Doo,” has just made history with its terrible reviews.

The HBO Max show was created by actress Mindy Kaling and tells the alleged origin story of the “Scooby Doo” character Velma Dinkley.

However, Kaling altered the Velma character and added leftist messaging to the show to make it more “woke.”

As we’ve seen time and time again, going “woke” is not a recipe for success, quite the opposite in fact.

And in this story, Velma’s commitment to the “Get Woke, Go Broke” mantra is displayed in its historically bad reviews.

The show has been getting trashed on the review-aggregator website Rotten Tomatoes.

And now it’s landed the number three spot on IMDb’s list of worst-rated shows of all time.

The appalling response to the show comes despite only four episodes of “Velma” having aired so far.

Nevertheless, the show has already racked up over 45,500 1-star reviews. 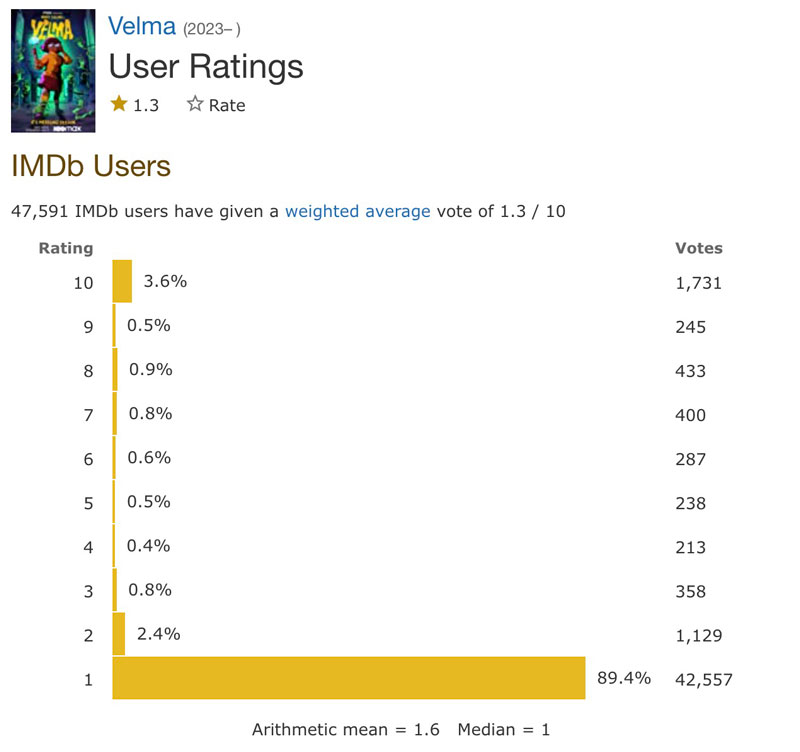 Kaling’s “Velma” is only behind “The Pogmentary” and “Iste Bu Benim Masalim” on the worst-rated IMDb list.

To round out the bottom five, “A Little Late with Lilly Singh” and “Santa Inc.” are behind “Velma.”

The show’s negative reviews are all over the place, though they all agree it completely misses the mark.

Some slam Kaling for going full-woke and constantly focusing on race, sexuality, and gender.

Meanwhile, others are incensed about how far-removed the show is from the classic “Scooby-Doo.”

And it’s even worse for Kaling, who strived for woke applause.

Some reviews on the IMDb page actually slam the creator of the show for its apparent racism and sexism.

“The jokes aren’t funny. It’s not cool. It’s not hip. It’s the opposite,” one review reads.

“One for how terrible it is and it is really bottom of the barrel terrible, and two for its obvious sexism and racism.

“What an absolute insult, really, to anyone with half a shred of respectability.

“I’m just staggered that this even exists.”

Another high-ranking review on the IMDb page highlights the bizarre sexual aspects of the show.

“This was atrocious,” the review reads.

“I watched the entire first episode and did not laugh once. Not even a chuckle.

“The jokes were so juvenile, so heavy-handed and the premise so far removed from the original IP, it was embarrassing,” it continues.

“Why is this series about sex and what does any of the random sexual situations have to do with Scooby Doo?

“Speaking of which, where is Scooby and Shaggy? …

“Personally, I feel like HBO and Mindy Kaling owe everyone an apology for this abomination of a series.”

Notably, before the show even aired, Kaling made it a point to emphasize that the main animated character, Velma, would be South Asian.

“Hopefully you noticed my Velma is South Asian,” Kaling said last year to a crowd of fans.

“If people freak out about that, I don’t care.”

Why Velma’s race was changed is unclear.